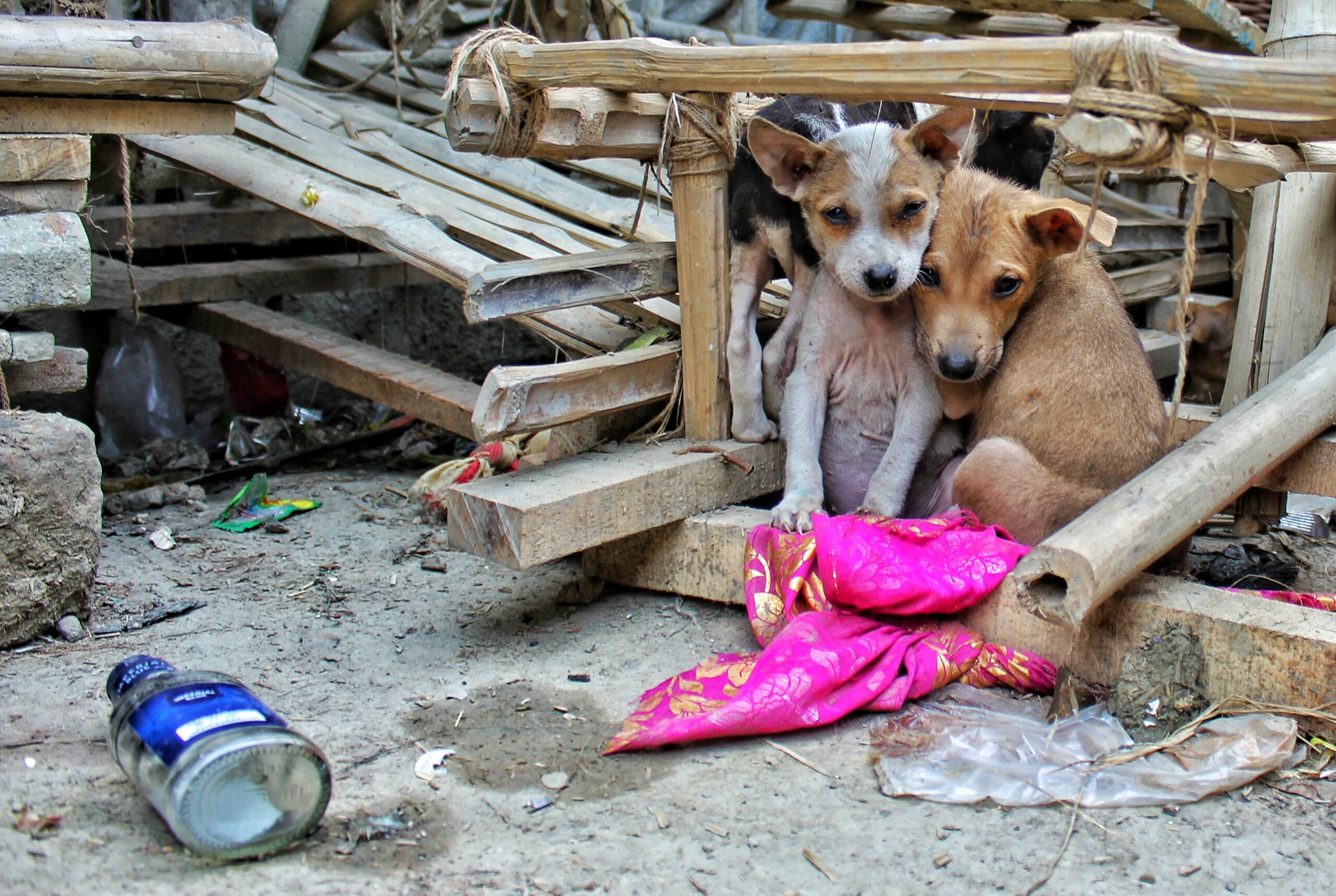 In the short time span in which we’ve existed – you, me and the rest of us – we’ve made countless decisions. Some were effortless, while others were more cardinal than choosing the right colored tie to go with our hypothetical pants, but the most important ones, I believe, and centric to this article are our decisions that affect others. Regardless of some being seemingly trivial on the surface, these decisions shape our collective society, render actions justifiable or deem them unacceptable, and assign rewards or punishment as consequences, and today I attempt to dissect the roots of such decision-making with two major contemporary coexistence issues in mind – one is concerned with the intertwined lives of humans and non-human street dogs, and the other probes the bond, or a lack thereof, between citizens and refugees. While the discussion pertains to circumstances that have unfolded within Bangladesh, the core principles that guide such complex relations can be applied elsewhere.

It was around 12 pm when a woman straddled into Obhoyaronno’s CNVR facility. She wasn’t alone, a small puppy peeped through her orna, quite comfortable in her arms but also nervous to be in a new place surrounded by new faces. The puppy was old enough for his first shot of rabies vaccination and he pushed through Dhaka traffic with his human friend to get his very own vaccination card – a “safe dog” certificate that he can parade in front of those in his neighborhood who haven’t cozied up to the idea of sharing space with the likes of him yet, and perhaps, these attempts to persuade his human neighbors are futile but public health mandates stresses the importance of canine vaccination in the fight to eliminate rabies so the effort would not completely be in vain.

I recognize that the language I have used and the way I have chosen to describe the day assigns more agency to the non-human puppy than what is generally owed to him – a feeble attempt at irony because I would argue that it is inherently in the words we assign to a population we do not identify with or attempt to understand and the singular ‘one-story’ narrative we popularize in common rhetoric that threatens a vulnerable individual’s ability to control their own story.

When colonial influence urges people to refer to street dogs as ‘strays’, it instills the notion of these sentient animals as menaces, necessitating immediate removal to restore urban establishments to their pristine ‘only human’ domains – the only catch being that such a reality when Bangladesh was unoccupied by non-human street animals has hardly existed. When political incentives obstruct the recognition of the Rohingyas as ‘refugees’ and instead refer to them as ‘Forcibly Displaced Myanmar Nationals’, the protection that is owed to them and the legal rights attached to a refugee status is deliberately denied.

Street dogs are not a novel presence in the urban ecosystem of Bangladeshi cities. In villages, dogs are seen trudging about on private property, called out by the very names their ancestors were appointed with – ranging from tiger, tommy, lali, kalu, etc. – unoriginal but endearing just the same. These four-legged beings have existed, and on good days, co-existed with humans for eons, and in this part of the world, they have belonged – if not behind picketed fences or closed apartment doors as ‘owned’ animals, then in our messy, sometimes poorly-planned and dimly-lit streets, where having to jump over sleeping dogs on your way to work is as normal as complaining about the heat in this country when summer hits. Our history is not bereft of accounts that highlight our people’s relationship with dogs and other non-human animals, albeit that relation has never been straightforward or easy to assess – nor was it in the past, neither is it today. In an empirical study done not too long ago in two Indian cities, it was found that human perception of dogs was multidimensional across varied socio-economic groups (Srinivasan et al., 2019), meaning, regardless of the income or dwelling of an individual and whether they lived in high-income communities or slums, their behavior towards street dogs remained non-linear and independent of their socio-economic status. Bangladeshi cities are similar to that of India in terms of ecological and social structures, and while one can easily assume that the poor are more likely to have negative views on human-street dog coexistence owing to their increased risk of rabies contraction or the frequency of interaction with the animals, or even assume that the opposite in fact is more likely i.e., the rich disliking dogs and  demanding ‘cleaner’ streets – empty of the animals that can never cease to be dirty in their eyes, but neither is the case. Even at the brink of discomfort, inconvenience and fear, coexistence is the only route forward for some.

On the other side of the coin, human refugees – a population misunderstood, misjudged, and misplaced, are not new in Bangladesh either. The 2017 exodus of Rohingya Refugees into Bangladesh was not an isolated incident. The rift between Rohingyas and the then-called Arakanese can be traced back to the year 1825, after the first Anglo-Burmese war. Systemic injustices and discrimination, bouts of unprecedented violence and torture, and extra-judicial killings led to the Rohingyas being identified as the world’s most persecuted minority group. With their agency threatened, the refugees had little to no say on how their futures would transpire in a foreign land. They could take some comfort recognizing that strangers are willing to help but we can only imagine how nerve-wracking and traumatizing it was to be catapulted into a new place surrounded by new faces, under the circumstances that they were forced to bear.

The parallels that I’m drawing between the two very different coexistence conundrums does not aim to belittle the plight of a population forcibly removed from their homes and make light of the unconscionable tragedies they have faced, or offend the sensitivities of those who harbor an anthropocentric view of this world making the comparison between humans and non-human lives essentially insulting to the former, rather the goal is to highlight the dormant intolerance of the ‘other’ that molds conflicts within these groups. The ‘othering’ of a population can be defined as a separationist agenda that alienates a minority group from the majority, reflecting discourses that describes the presence of the ‘other’ group as a constant threat to the majority’s health, security and even economic productivity (Narayanan, 2017). Whether the threat is exaggerated or even unproven adds very little weight to conversations that are anchored in misinformation, spread aggressively through the grapevines of bigotry and prejudice. It is common to witness debates on social media that regard the existence of both street dogs and Rohingya refugees as a visceral attack on the freedom of Bengali citizens – as if the issue can only be viewed as a zero-sum game, where aid to the minority group means direct harm to the majority.

“Why couldn’t you invest money towards a human hospital?”- a question regularly hurled at me by netizens who hold the assumption that if money is divested from a rabies and dog population management facility, then the institutional failures that they regularly grapple with and are frustrated by will finally cease to exist. Similar statements are made when aid dissemination for the refugees are discussed – focusing more on the supposed losses we incur as a nation than the defenseless plight of the Rohingyas, a state of uncertainty any one of us could face in a world as predictable as ours. It is true that coexistence is not easy – there are tradeoffs and conflicts, requiring routine interventions and constant investments with limited and slow returns, but even if the road forward is difficult, it is the right path to choose. A path characterized by kindness and empathy, while actively holding institutions accountable – both national and international, and studying the origin of such conflicts such that we are exceptionally clear on what to do to stop history from repeating itself.

When certain factions of humans or non-humans are thought to be separate from political and ethical considerations, and our perception of them and all that is associated with them is masked by a disconnect caused by privilege, entitlement and gross dogmatism, our decision making and our discourses are laced with resentment. Morality stemmed from religion, social values, or simply, the acknowledgement of another being’s right to exist and experience life, fashions a sense of tolerance, without which the very sanctity of what it means to be a conscientious human remains at risk. We can only attempt to come together if we address our own biases, hold ourselves accountable, and allow our actions to be governed by moral codes rooted in reason and humanity – for both humans and non-humans alike.

Narayanan, Y. (2017) ‘Street dogs at the intersection of colonialism and informality: “Subaltern animism” as a posthuman critique of Indian cities’, Environment and Planning D: Society and Space, 35(3), pp. 475–494.